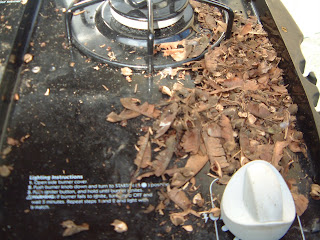 The little brown squirrel that is part owner of this ground is not easily taught to clean up his mess. In the fall he spends a lot of time pulling off the scales on the Douglas Fir cones and eating the seeds, leaving the scales strewn about. Now he has clearly stored last years maple husks somewhere at home, resurrected them, is cracking the husks and eating the seeds. Home for the little brown squirrel according to my neighbor Dennis is in our woodpile. Not the new one but the old punky one that we have given up on and is slowly slipping back to nature with it's mix of apartment dwellers of furry and carapace nature, four, six and eight legs, maybe more for all I know. Why the squirrel stores in one place and then transports them up to our barbeque and eats under the barbeque cover, I am not sure. What you can see are the scraps he leaves behind, all the seeds removed and he neither cleans the table, or wipes up after himself. His table manners seem atrocious. I clean up after him at least once a week. I say him, because she wouldn't leave such a mess out of maternal caution as well as just, doing it right!
Posted by jim at 11:52 AM