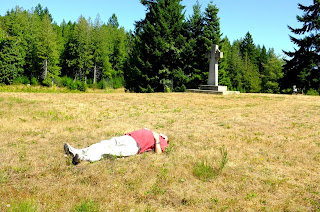 As I lie on my preserved plot in the Anglican cemetery on Lotus Island, getting the feel of it, the blue sky and cumulus clouds and bright sun that I love along with the pastoral surroundings of verdant nature will be there, as before, when I am underground. For my sins I guess, I am the cemetary manager for the four Anglican cemetaries on Lotus island where there seems to be more dead Anglicans than live Anglicans these days. That makes me the sexton and the description of that job says one is the custodian of the sacred objects. Can I think of a more sacred set of objects than the remains of the families' and friends' loved ones? I cannot! To assist with those who choose the plot they wish, to organize and be with those who dig, to stand back as the circle of family and the priest inter the remains, and connect with the grief at the outer edge of the circle,  becomes an enclosing act of worship, not just for the person, but for the event of commital. To enter the earth and become the earth is the final act and the final goodbye. I had no idea my first year as a sexton would teach me so much. I guess it may be true that most, or maybe all of life is just a rehearsal!
Posted by jim at 9:12 PM No comments:

Some years ago, before Governments and their agents, hospital boards and CEOs and CFOs were given an extra allocation for some surgical procedures that had been underbudgeted, those of us doing major joint replacements were struggling. Patients were waiting in Lotus City two and three years to get a surgical booking and in addition to pain and disability, actual hip pathology often altered, that compromised the end results. Since hospital budgets were usually predicated on the previous year and negotiated by the governing body of the hospital with the provincial government, there was inertia in the system despite the rapid advance of technology in replacement surgery. Rationing therefore flourished, and allocation of budgets both stalled and were applied to the most publicly attractive care packages that would seem to provide hospital boards and provincial governments, to its public, in a good light. Eventually a confrontation was engendered by the orthopedic surgeons and the hospital, occasioned by threatening the competency of these nonmedical decision- makers to, and through public channels!  It was ugly but provoked two things! One, our offer that an independant evaluator of the hospital's choice would review the entire procedures to determine the adequacy of the budget and the irrationality of the rationing. The orthopedic surgeons as a result of this review, won the round in spades, but the hospital, of course, never provided the details of the written report for our review. Typical! As a result however , at that time, and this is the kicker, the budget never changed!
However again, since they were beaten up by their own reviewer, they made an offer. We could increase the numbers of replacements by using a substantially cheaper prosthesis, manufactured by a different procedure, and that way, stay within the same budget. Can you imagine me saying to you that we can get on with your hip replacement with an inferior prosthesis? Of course the carrot they thought for the orthopedic surgeons was that they could do more hip replacements with the same hospital budget and therefore make more money for the surgeons themselves through the separate medical insurance plan. Their administation saw this as win, win! We both could pick the pockets of a different funder, the medical services plan! Budget terrorism!  It wasn't a win for us since, it isn't ethical to put an inferior prosthesis in a patient's hip or knee; our onus is to minimize post operative short and long term complications for our own survival and resist clever solutions derived on the backs of patients. Boards, CEOs and CFOs never have to see patients: never have to see surgical failures year after year in the office; groan! Fortunately adverse pressure worked to some degree and budgets much later were expanded for replacements; unfortunately after I retired. They never really understood why we didn't jump to their initial offer of B level prosthesis.
Posted by jim at 11:47 AM No comments:

I bought a print the other day of the Camino, the road from France to the Spanish town of Santiago de Compostela. It was in an exhibition series of paintings in our library exploring the nature of roads. Standing on the road; a trail really; was a solitary lengthened shadow of a figure with a stick: the low sun, the sense of impending twilight; and the antiqued paper giving the print of the road a quality of roughness and endless distance. A road always suggests a journey: leaving somewhere, or something, or someone, and going to something, or somewhere. But the gist of the journey is the process, not the beginning or the end. The shadow on the road is fully in contact with it, not just the soles of one's feet, and the shadow looks forward and backward throughout the journey, leading and following, and watches the traveler from one side or the other as well, through much of the day. Though the traveler passes through the country, the road, hard and rough, the traveler footsore,  he is confined by the direction of the roadway if he is to progress to the intended target. If it's the road to Zanzibar Dorothy Lamour makes with her friends, or the Yellow Brick Road or the Camino road, the place to be is the place between. This is where we walk a step at a time. In my print, the solitary figure expressed by shadow gives a feeling to the viewer of the loneliness of the roadway. There is no Bing Crosby or Bob Hope to accompany Dorothy! There is no Toto to accompany the other Dorothy! But of course, these are only fantasies of reality on the roadway.There is no bicycle, no automobile, just a narrow road in my print for which each step is the only present and the only reality. My print could have been anywhere because road is a metaphor for life. I have never taken the road to Santiago de Compostela and I am too old now to do it, but a road is a road is a road and we all are on a roadway to somewhere and leaving somewhere.  It's the process that we live with from that road we decided to take, rather than the goal that will take us somewhere else. How many times did you start with a goal and find during the journey that the real purpose was somewhere else?
Posted by jim at 2:59 PM No comments:

When a leg has been removed, for any reason, the image of the leg remains as a phantom and you may alight from your bed after a sound sleep and attempt to stand on something that is not there. The cortical imprint of your leg in the brain remains for some period of time despite the sensory input that no longer exists. This is called the phantom image. The larger map of neural areas in the brain for the lower limb are the joints, knee, ankle and the great toe. These are the phantom images identified most commonly by the patient, but as the brain adapts to the loss of limb, recognition occurs that there is a forshortening of the phantom towards the stump end, rather than just fading away. Before it fades the foot is felt on the end of the stump. If a history of severe chronic pain has been present for some time in the affected limb before amputation, then rather than just a phantom image alone, phantom pain will sometimes ensue.  The brain we now know has a self adjusting ability to add or delete mapped areas that serve the body as needed and it is is increasingly understood, but change is slower and less deliberate than we might wish, nevertheless the brain has infinite potential to adapt in time. Where chronic pain has been present it is probable that the cortical representation is larger and adapts more slowly. Given this mystery of pain, or image, where the limb source no longer exists, it should follow that pain in other parts of the human vessel we call our own could still be  remembered despite all manner of conditions that now no longer show any discernible problem of pathology. Phantom pain in the back, gallbladder, shoulder disorders or a legion of other painful conditions that defy explaination are not entirely dissimilar to phantom pain following limb amputation that is clinically unquestioned even if still ill understood. When they said in that scheme of things, that it's all in your head, it would have a different meaning if the analogy to phantom limb is a viable theory. Then it might mean, it's still on your cerebral cortex for a while and wait till the three pounds of grey matter remaps itself. It may be a simpleton's theory for a high powered neurophysiologist, but I am long in the tooth and too short of time to shut up.
Posted by jim at 9:01 PM No comments: