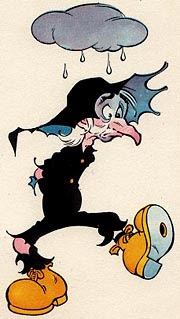 Bad news sells! We all love dirt! "The Inferno" has always been more interesting than "Paradiso". Schadenfreude is spelled by the Germans but practiced worldwide! I don't excuse myself from any of this! Canadians may be particularly bad at well wishing anyone who soars! Just read the comments on any article in the Globe and Mail! I hate the comments, but I read them, so I can't hate them much! Of all the deadly sins the most self destructive is envy. It's more destructive on the envier than the envied. Actually the envied rather like being envied! What is it about the Joe Btfsplks and the Eeyores and the Chicken Littles these days! Eeyore always found something wrong with Pooh's optimistic ideas, both Joe and Chicken Little were beset by the constant rain cloud or the sky cracking. Is bad news,other people's sins and an immanent sense of disaster providing some form of extreme vitality to an otherwise pedestrian and mundane life style? Something came from the sky for Jesus too . It was a dove and gave a thumbs up sign to life! The Jews of Jesus time were looking for a warrior to beat up on the Romans and their proxies, but they got a peace maker and an optimist who didn't flinch from all the negativity he got then, and still doesn't flinch now! It's difficult for me to behave as well as I want in this world since I am such a human being! I still rain on other people's parade. I still am called Eeyore by my committee colleagues. I still fear that the sky is going to fall down! I'm old enough that I should know better, or not admit it!
Posted by jim at 12:22 PM No comments:

PC was a prominent physician in Lotus City in the olden days. One of his patients, for whom he particularly attended most diligently, was a wealthy English Lord, transplanted to Lotus City in the days of Residual Empire. PC was not only prominent, but an excellent and knowledgeable internist whose opinion was sought after by many of his colleagues. Despite the fact that he was always busy, PC, nevertheless, took the extra time the Lord believed he required, and in turn, was received royally by his wife and himself. The Lord had an old Rolls Royce that PC always expressed great admiration for and he rarely failed to complement the Greatness as to his considerable fortune to have such a vehicle. Despite the rigorous and intelligent care of PC the Lord eventually succumbed to old age and died. Shortly after the funeral the Lady phoned PC to make an appointment with him in her home. She told him the the Lord had included PC in his will and wished him to have an item which he knew PC had greatly admired. She added that this legacy was something he and his patient had often spoken about during their engagements. PC attended the appointment with the Lady with a great sense of anticipation. Surely the Lord would supply his fonder dream ? She showed him the will. The Lord had left PC his club tie; she said a prized possession that PC had apparently admired! He couldn't recall the event, but conceded in his mind that it was probable. Expect little, receive much! Expect much, receive little!
Posted by jim at 10:47 AM No comments:

Oz and the Wizard

The story of The Wonderful Wizard of Oz is, in my opinion, a exciting children's story with beautiful allusions of a psychoanalytic nature. Most exegesis that have been written about the story have been centered on the political rather than the psychological. Others address it as face value. However, where,for example,could the lion find courage, other than through a magical process of being given a placebo? He didn't know that he always had that courage! He found it had always been there when it was apparent that the Wizard wasn't a whiz! Self realization is what it is all about. Capacity will build for him with this knowledge. Where would the Scarecrow get his brains other than begging from some external magical source? He didn't twig to the fact that he was always smart. When he realized that the Wizard really had feet of clay, and what we seek is inside us, latent, and awaiting discovery,then his brain became a reality. Where would the Tinman get a heart other than from a transplant from the Cardio-wizard? Nonsense! The story of the Tinman is, he always had a heart. His attitude thoughout the journey told us that. He just didn't recognize it. None of these chaps realized their potential 'til they stopped thinking entirely about their own troubles, and combined their needs with helping a little girl to get home. You can take the story of the Wonderful Wizard of Oz at face value ,or the politics of the time, but it seems to me that there is an exploration of the human condition. Who knows what is behind Frank Baum's masterpiece? Some may say it is wrong to dissect this story, or attempt to deconstruct any literature, since we will never know entirely what went on in the author's head. There are two bookends to any story,the author and the intent, the reader and the understanding. What he said and what I heard! They may not be the same! It may not be important that they are the same!
Posted by jim at 4:22 AM No comments:

My brother Phil challenged my recollection about the sweet corn of our youth! He maintained, in a comment on my earlier post, that Saskatchewan had too short a growing season to produce a sweet corn, superior to that of the Wet Coast. The pianist, who grew up in the Qu'appelle Valley, Saskatchewan, swears that they lived on Beefsteak tomatoes and Golden Bantam corn, grown in the fall on their valley cottage garden. Her memory is as "sound as a dollar" used to be. Golden Bantam was the "piece de resistance" of the sweet corn family in those days of yore. It had a large stock with small irregularly rowed ears. It was no match in appearance for the modern hybrids, but so what! It was sweet and matured early and you could save the seed. It's now a Heritage Variety. Phil is probably right that my memory is a bit tricky. I am allowed, however, to be extravagant and embellish my anecdotes as part of my poetic licence. Everyone must know that sweet corn always tasted better when you were ten, than when you were seventy. No ten year old worried that his cob had irregular rows and was unusually small, since there was always more where that came from. One of the great joys of reverie is the pleasure one gets from revisiting history through rose colored glasses. "Precious Memories, How they Linger!" Probably sung by more artists than most any other song. The past just seems like yesterday!
Posted by jim at 3:34 PM No comments:

Life on Lotus Island does not include living with gumbo! The thin ,stoney, acidic loam, with high drainage capacity, needs work of a different kind than the sticky gumbo of our storied past, on the Bald Prairie. In the early spring, before planting season in Kindersley, your best shoes had 2 pounds of gumbo on the soles that wouldn't shake off when you went to Sunday School. You had to use the mud scraper to get anywhere with gumbo removal.We always used it before we walked on the living room floor. There certainly was a reason we had wooden sidewalks in those days. Except, you wouldn't expect a kid to always walk on the sidewalk. Here, on Lotus Island, a mud scraper would be a foreign object of an unknown nature to anyone other than a stubble jumping refugee. It meant of course that a later planting season occurred on the prairies, particularly if the snow load was heavy and the ditches and dugouts were full. That was OK for us since the soil had a better tilth when it dried a bit. Curiously enough when we planted here on the Wet Coast in April and they, on the prairies, planted on May 24th, by the time in mid-July, the vegetable gardens in the prairie towns were way ahead of ours. Hot nights will do it! We never had running water in some of the towns we lived in, but with gumbo you could get away without watering as a general rule. Not always, but the soil was remarkable for water retention quality. There was no contest from the Wet Coast, to the Prairies, for ripened tomatoes, sweet corn, peonies and lilacs. Gumbo soil and hot nights produced!
Posted by jim at 12:24 PM 1 comment:

Over the years, kindly bee-keeping friends have lent us hives for the apple orchard during pollen season. Honey bees are more reluctant than bumblebees to come out in cool weather, so conditions have to be right for them. My friend Dave,an experienced bee keeper, has been supplying us latterly with two hives, which suffices. We get the pollination and he takes the honey. Our bloom is a little early this year. We usually figure May 5th for maximum bloom of the Gravensteins. They, of course, need a friend of a different variety for pollination. I am always in awe of the way experts such as Dave handle their job with such ease. My only skill with bees is avoiding getting stung. I have had to call Dave for swarms hanging on the apple tree like a football, seething and shimmering, a bee colony in the rafters of the crawl space of the house, and a bee colony in a hollow of an old Transparent where we were trying to insert a drain. Each time, he responded with skill and dispatch. The only time I was in danger of getting stung was in weeding the strawberry patch when the bloom was good. The bees do not take kindly to pressure between the thumb and forefinger when they are feeding. We had a young family of friends visit us for tea and cookies last summer. The young mother cautioned her children to stay away from the hives. We have a swing and a climbing tree in the orchard, away from the hives. The little boy however, couldn't overcome his curiosity about the bees and got too close, and then, gave the hive a little kick since there wasn't enough action that he could see. At six or seven you can't outrun bees.Of course he ran right by his sister who was obediently on the swing. Her mother came barreling into the orchard. It was chaos! The bees were in their clothes and hair . The children were stripped and we picked out bees from the hair and clothing. The kitchen floor was littered with dead bees. The pianist ran upstairs to get the bee sting kit with the sting stick. The children were fine and so was their mother. After the initial shock there was relief and even a sense of having come through an event. The children were remarkable and suddenly became excitedly good humored . I couldn't get over how resilient they were. It bodes well for their future. Their mother experienced the "Whew Factor". Our forgettable afternoon tea transformed to an unforgettable afternoon. There was no reaction to the stings, thank goodness. I asked Dave to remove the hives! The pianist and I are not going through this again! I'll rely on the wild bees.
Posted by jim at 6:15 AM 1 comment: