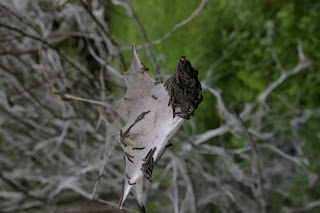 The massive hatch of tent caterpillar moths has happened this week on Lotus Island. They are everywhere, resting on the house siding and windows in hordes. Invading every cranny and nook where a little warmth can be found. This spring was a moderately bad year for the tents on the apples, and other soft leaf trees so the moth invasion portends a much bigger year next year. Interestingly I had made a search the past winter for egg cases and found few, so concluded that I didn't need to dormant spray. Big mistake! The trouble with Lotus Island is the "green movement" is so driven that even dormant spray is considered by many as dirty pool. This spring I spent a long time cutting off all the tents and drowning the tenters in the harbour but I can't spare the time to drown the whole island population of webworms. Now we have to await the natural control mechanism by parasitic wasps. The tent caterpillars this spring, when observed did not have that telltale white spot, dorsally, just behind their head. I should say the satisfying white spot. The parasitic wasp lays its egg there and on hatching the wasp larvae feeds on the caterpillar. The rise of the worm population provokes a rise in the wasp population. Isn't Mother Nature grand? In the meantime look next year for denuded spring time trees on the island due to the massive egg cases that will come this fall and winter over. Fortunately Mother Nature provides a secondary leaf recovery. If you have apples, plums and cherries, prepare for the worst!
Posted by jim at 8:39 AM