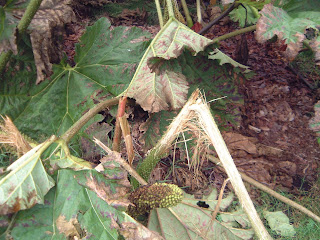 It's fall and the Black Tailed deer bucks on Lotus Island, a subspecies of Mule deer, are in rut! Whether they are getting rid of their antler velvet to get into fighting trim, or practicing their moves against the Gunnera stems, is moot. Either way the young are preparing for the coming conflict. Once the testosterone rises in deer or man, some projection may take place. Whatever harm did the Gunnera do to them? And yet, it is a convenient foil! The stems are coarse with rough spinous projections, sufficiently sharp to remove velvet! After that little favour, it's not much of a step to give the stem a good whacking with the newly hardened antlers. The warrior class is simply doing what is necessary to perpetuate the species. Lucky for us they are benign warriors throughout the growing year until fall so the Gunnera enjoys a pristine existence 'til now. The plus for all this is they leave the bark alone on the smaller ornamental trees that would otherwise be victimized. I hate the idea of surrounding all the little trees with wire cages. If you are not going to restrain the warrior class by fencing them out of your property, you must respect their need to train, but hope that they will restrain themselves by doing only what is necessary! That said, one doesn't want the young and fearless males to be equivalent to a walking Gonad controlled by a Betz cell! Wreaking havoc! The species would be indeed be in jeopardy!
Posted by jim at 12:09 PM