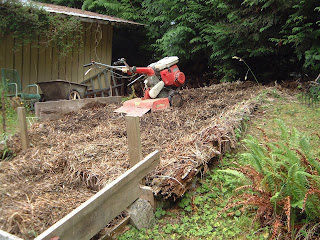 After a hot, dry midsummer, the rain came for a few days and I rototilled my compost pit! It's a great way to mix the working material, but a cautionary tale is, avoid the front tined tiller.The rear tine tiller gives much more control in mixing, and you are less likely to fall off the compost heap. The compost I have consists of shredded hedge cuttings with lots of leaf, and old straw bales used earlier for dahlia bulb storage. These take time to digest! I throw some balanced fertilizer on it to speed up the working, and some of my nephew's Happy Farmer Bokashi (tm), with SCD Efficient Microbes! These latter two things are less important than the adequate mixing of the materials,and even more crucial still, the tiller brings up from below, the thin residual layer of compost we always leave behind when we spread it on the garden in the previous fall. Last year's compost is like the sour dough starter yeast that the bread makers prized and perpetuated for years. How could a Old Sourdough manage to live and prospect without his cache of yeast to sustain him? Last year's retained compost layer is like the residual tea leaves in the cha-damari of Japanese tea ceremony raku bowl. A ceremonial tea statement that we never take all from the world! We return the compost to the land from whence it came, but leave a little behind as a starter for the next year's compost. This is practical. We also leave a little compost remaining behind because we do not take all from the earth. Like the raku which also comes from the earth, we leave a few tea leaves in the raku bowl, and compost in the pit, as a spiritual reminder that we always owe a debt to life!
Posted by jim at 12:14 PM