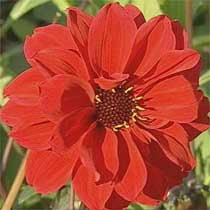 Bishop of LLandaff, some times listed as (Landorff), is a heritage dahlia, first created in 1924. It is by modern standards very venerable, like it's namesake. Llandaff is the Scottish Episcopal Seat in Wales where it was first developed. It cannot be purchased locally, but is available through friends, as is the one currently in my possession. My friend Sue, who gave it to me, tells of her parent's garden in Comox BC, which was then, a commercial Rhododendron nursery,but had some Bishop of LLandaff available. Her mother wrote to the Royal Horticultural Society in England to offer Bishop of LLandaff to them, since they wrote an article describing their loss of this treasure, following the second world war, stating the dahlia had disappeared in English gardens due to displacement because of the war effort and the priority of food gardens. The pianist tells me her "nana" grew it in her garden in Regina. The plant is a small,semi double dahlia,with a red core and rich red petals. The foliage is green black with a small but attractive crenellated leaf margins. This is the only heritage variety I have, as most of the dahlias I own are modern hybrids produced by a limited number of committed hybridizers. The season this year has been exceptionally long and the dahlia are still in good bloom. I am looking forward to growing Bishop of Llandaff next year! A dahlia that has remained with quality morphology over almost eighty years and has an affectionate following among knowledgeable growers has outstanding worth! It may not have the lushness of today's varieties but it has the character and the history!
Posted by jim at 12:41 PM