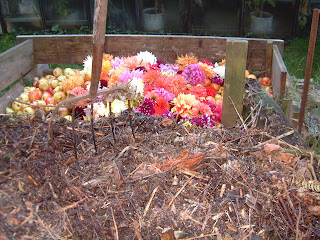 I was watering and turning my compost the other day and thinking of Empedocles. He, according to Will Durant, lived 500 to 430 BC. You may know, that he was the first to describe the four elements of which the world is composed, and no other. It's still true, and my compost tells me that is so. The four elements are fire, water, earth, and air. This understanding was foundational to the classical philosophers that followed Empedocles. As I attended my compost, which was mostly straw and green vegetable matter, I provided water and the pile was very hot as it was turned. Deep down it was breaking up and becoming soil , was warm and richly brown and particulate. It was loosely piled by me, as it requires to breath, in order to work. It is true that the four elements are extraordinarily complex in their developed state, but the compost is the great leveller. Even you and I will be returned to dust, and if we are burned in the undertakers compost bin , the heat will be much faster than my compost. So the compost pile, through air and water and heat, becomes earth, as does all else. Empedocles died in the fashion of his philosophy ironically. He became convinced that he was a god and could fly, and hurled himself into the mouth of a volcano. He couldn't fly, and so hurtled through the air and heat and undoubtedly,since he was juicy, returned to dust.
Posted by jim at 1:41 AM