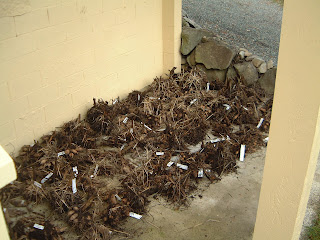 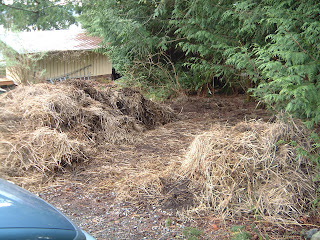 I pulled all the dahlias out from under the straw where they have been sleeping all winter. Even though it is warm enough on Lotus Island to winter them in the ground, our dirt is too wet in the winter since we are below the Hundred Hills and they will rot. They have done so in the past, when I was lazy one year. Why we always learn the hard way I never know. They came through with less than 3 percent rotting this year which is pretty good for me. I used to wash and dust them before storage but now just shove them, dirt and all ,under copious amounts of straw beneath a tarp. The bulbs are particularly nice and plump this year. Now I have to split them as they are compounded and multiply compounded. Quite the job. I also have to haul and compost the straw. I find it quite interesting that some named varieties of dahlia have dramatic propagation potential and some, chiefly the larger flowering types are much more feeble about bulb production. If I was a commercial grower I would care about that. Where else can you get 10 or 15 bulbs for 1, per annum with some varieties? I'd be a millionaire if I could do that with money. I like dahlias better than most flowering plants since they are user friendly, propagate like stink, and bloom all summer. The deer may browse a little but they do little damage to them. The slugs are voracious with dahlias but a few early morning rounds and tallying the count that you achieve cutting the slugs in half, will make them soon disappear. It's still pretty cold out, but I have some drier areas, and will take a chance on planting the ones that have sprouted. The sprouting bulbs have an innate intelligence I think. Normally, it's best to plant them when the Oak leaves are the size of squirrel's ears, but I have no Oak trees to check, though I have squirrels. They say we are to have a very warm April so I wish it would hurry up and come. A watched kettle never boils.
Posted by jim at 4:09 PM