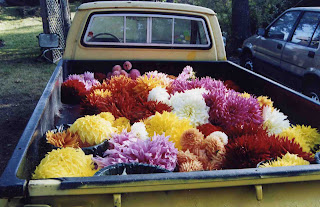 My mum and dad in retirement lived in a high rise rental unit for a number of years. There were a large number of units rented, almost exclusively by elderly people. My dad, in his heyday, had grown an abundant number of dahlias and gladiolus and missed the prospect of cut flowers always being available for their home. He spent half of his horticultural lifetime giving away flowers to all and sundry. It was his shtick! Since I am a chip off the old block I have grown dahlias for a number of years in some volume, here on Lotus Island. I grew gladiolus for a while as well but eventually quit because the deer eat the florets. They don't eat the leaves but what is a glad without flowers? The deer here may browse a little on some of the dahlias,but not much, and then the leaves only. If they are too persistent I give the plant a spray of Plantskyyd. I started taking dahlias to my parents at Lotus City once a week. Then, they had a few friends they asked me to bring some for as well. My donations were well received and soon most of the renters waited for me as I showed up at the same time every Wednesday . My "customer" base grew like wild fire. They called me Dr. Flower. I'm not sure that I liked the name. It sounds like Dr. Dolittle, or Mr. Rogers, not the image I necessarily wanted. However, the name stuck, so I had to wear it. In point of fact I loved the idea of dahlias spread throughout the block. No doubt there was some ego on my part. Nothing is fully clean. The love of color and beauty by older people in a concrete apartment made the gift giving a continuation of my dad's generosity. It was a boon to me as well because a few days later,the dahlia would have needed dead heading, so it was really little additional trouble. My dad died, my mother moved to a nursing home,my truck expired, and I ended my flower toting activity!
Posted by jim at 4:25 PM