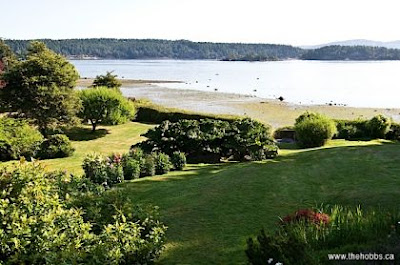 I have been watching the Osprey fishing today, on our side of the harbour, opposite the Three Sisters. It appears to dive headfirst into the shallow water but comes up with the fish in the talons. They must make an abrupt turn at waters edge after the dive, in order to seize the fish with the claws and surge up through the surface tension of the water on the wing. They nest across the harbour. The water is deeper there, so the bird fishes on this side where the water is shallow and the fish are nearer the surface. The Osprey are a beautiful bird and much more adept at hovering and fishing than the Eagle which is too heavy to hover long and swipes the water when it fishes. The Eagle's technique is more in keeping with picking up ducks, it's more usual fare.The Osprey are far less commonly seen than the Eagle in our area. Later in the season the Kingfisher appears and fishes in the same spot as the Osprey, hovering in the same way, diving in the same way, but comes up with the fish in it's beak. Hover and dive and break surface into the air in one fluid motion requires strong wings, strong necks, patience, and accuracy, buoyancy and good knowledge of the best fishing holes! Both the Kingfisher and the Osprey are an object lesson on elegant ergonomics! The Osprey picked up a fish today right under the nose of a Blue Heron. As it were, success in "one fell swoop". Heron piqued!
Posted by jim at 7:31 PM